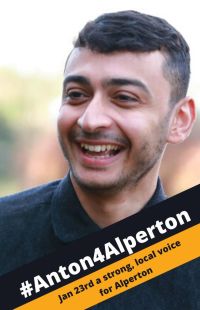 Anton Georgiou is the Liberal Democrat candidate for the Alperton ward by election on 23rd January.

Anton was born in Brent and has lived locally his whole life. He joined the Liberal Democrats after seeing the hard work done by his then local Lib Dem MP and Brent Lib Dem Councillors.

He has been campaigning in Brent for over 7 years, calling for tougher action on flytipping, more thorough street cleaning, against Labour waste at the Civic Centre, for repairs to streets and pavements and for a fairer deal for local people. Anton also opposes Brexit and is passionate about doing more for refugees and asylum seekers - an issue close to his heart as the grandson of refugees from Cyprus.

For Anton the Liberal Democrats represent the sensible centre ground in British politics at a time when the other parties have veered to extreme positions.

Anton is standing in the Alperton by election because he wants to be the hard working local councillor residents deserve.

For too long Labour have neglected this area and taken local residents for granted. This election is an opportunity to change that and return a Liberal Democrat Councillor to this ward once again.

Please signup to help in my campaign!